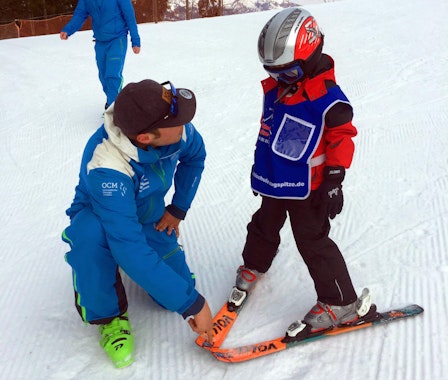 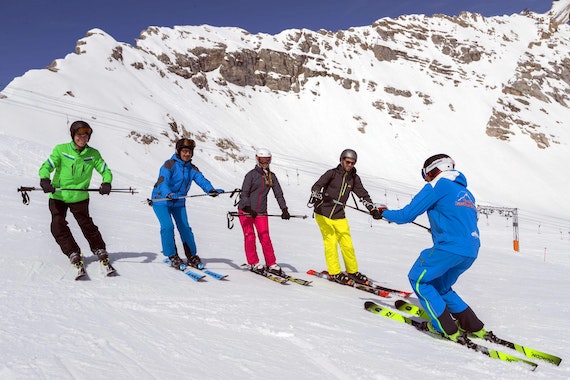 Guaranteed snow and lots of variety – skiing in Garmisch-Partenkirchen

Garmisch-Partenkirchen is one of Germany’s most snow-sure resorts. Visitors love the excellent conditions in this region and are bowled over by the incredible mountain scenery. The delicious local food is an added incentive to spend a skiing holiday in Garmisch-Partenkirchen. The Garmisch Classic ski area is popular with young and old alike. It has something for everyone, from gentle slopes for beginners to thrilling descents for expert skiers. Its three mountains, the Hausberg, Alpspitze and Kreuzeck, form a single ski area giving visitors access to 40 kilometres of pistes.

The Kandahar downhill run has been a fixture in the Alpine Ski World Cup since 1969. It hosted the World Championships for the first time in 1978, when Austria’s Sepp Walcher won the downhill competition and Swedish superstar Ingemar Stenmark won the slalom and giant slalom. In the women’s competition, Annemarie Moser-Pröll won two gold medals. But tragedy struck in 1994, when the World Cup downhill event was overshadowed by the fatal accident of Austrian skier Ulrike Maier. No more women’s races were held on this run until it was rebuilt in 2008. Garmisch-Partenkirchen hosted the Alpine World Ski Championships again in 2011, when the competition was dominated by Austrian skier Elisabeth Görgl.

Garmisch Classic and Zugspitzplatt – skiing for all abilities

Garmisch-Partenkirchen has two extremely varied ski areas offering 60 kilometres of pistes for all ages, along with a snow park. The Hausberg lift whisks skiers and boarders up to the Garmisch Classic ski area. This is popular with experienced skiers who are keen to test themselves on the challenging runs. The second ski area is the Zugspitzplatt, a glacier ski area that has some of the most reliable snow conditions in Bavaria. The stunning mountain views are another reason why a visit to this ski area is one you will never forget. At weekends, the Garmisch-Skiexpress train takes skiers from Munich to the Garmisch-Classic ski area in just 82 minutes.

There is no shortage of cosy Alpine lodges and restaurants for hungry skiers. Typical dishes from the Garmisch-Partenkirchen region include crispy knuckle of pork, tri-tip steak and apple cake. Zum Wildschütz is kitted out with traditional wooden furniture and gives its guests a warm Alpine welcome. Popular with lovers of good food, its menu mainly features classic Bavarian dishes and excellent steaks. Typical local dishes on the menu include Schupfnudelpfanne (chunky potato pasta), roast pork, roast beef and onions and lumberjack steak. Dishes featuring local game are also very popular. Anyone who has been to Munich’s Oktoberfest will be familiar with the beers from the famous Hacker Pschorr brewery, but guests who prefer a nice glass of wine with their meal also have a good selection on offer. The restaurant has seating for 90 guests. When the weather is fine, there are another 70 seats in the beer garden where you can eat and drink in the fresh mountain air. Of course, some visitors want to do more than just ski and eat when they visit Garmisch-Partenkirchen. Lovers of après-ski also want venues where they can party into the small hours, such as Drehmöser 9 in the Garmisch Classic area. From its lofty perch at 1,320 metres, it mainly attracts a younger crowd with its lively atmosphere. The Lodge am Hausberg is a combination of restaurant and music bar. It offers an après-ski vibe plus a chance to watch live sports on the big screen. The Bayernhaus on the eastern slope of the Hausberg has a very special, rustic atmosphere. Guests enjoy sunbathing on the terrace amidst the stunning mountain scenery.

A rainy day in Garmisch-Partenkirchen – no problem for sightseers

Garmisch-Partenkirchen has so much to explore that a rainy day is never boring. The Olympic ski jump has become a symbol of the town. If you’ve always wanted to stand at the top and look down, take a guided tour to find out what goes on behind the scenes during the famous Four Hills tournament at New Year. The Werdenfels Museum is a local history museum with fascinating exhibits, and the building itself is one of Bavaria’s architectural jewels. In its 19 rooms, visitors are introduced to the history and culture of the Werdenfelser Land. If you speak German, a visit to the Bauerntheater in Partenkirchen is always entertaining. Local people play the roles in comedies such as “The Village Priest” or “Clever Urschl”. It’s not necessary to speak the local dialect, as the actors ensure they can be understood by speakers of standard German. If you’re interested in churches, don’t miss a visit to St Martin’s Church in the centre of Garmisch. Highlights include beautiful frescoes and statues of disciples Peter and Paul.

The weather in Garmisch-Partenkirchen

Garmisch-Partenkirchen has a cold and temperate climate with moderately warm summers, cold winters and high rainfall throughout the year. July is the warmest month of the year with a maximum of 21.8°C, while December and January have the lowest temperatures. It can rain in Garmisch-Partenkirchen at any time of the year, and rain should be expected on at least 15 days of each month.

If you’re looking for somewhere to stay, Heimat 1883 is one of the resort’s best-kept secrets. The old building in the heart of Garmisch has a long history and has become one of the town’s landmarks. Its five beautifully furnished apartments are the perfect place to enjoy a relaxing holiday. It might sound strange, but tapas have their place in the Alpine setting of Garmisch-Partenkirchen. Since 2016, lovers of Spanish cuisine have been well catered for at the Alte Druckerei restaurant, where they can enjoy delicious tapas accompanied by fine wines. The restaurant’s name reveals the building’s former life as a printing house. If you’re looking for the right outfit for your skiing holiday, head for the Sport Conrad store. Located in the centre of Garmisch, it has everything you could need for your outdoor adventures, from skis and snowboards to climbing equipment, mountain bikes and hiking boots.