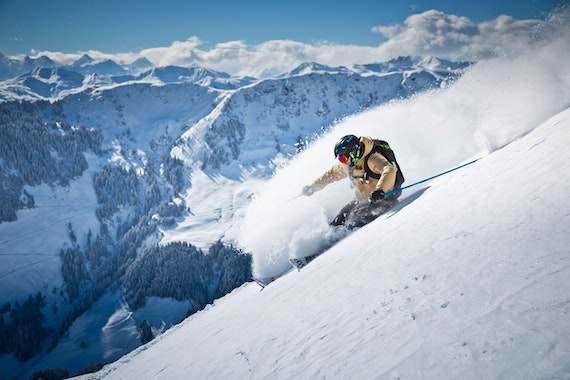 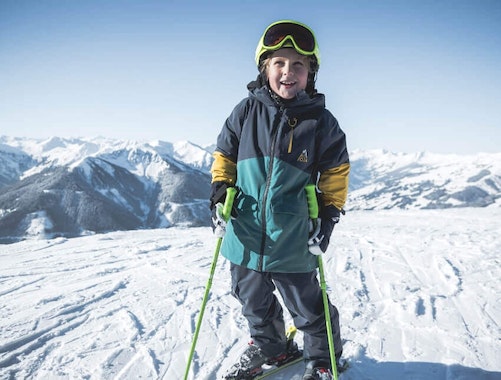 This diverse skiing area offers incredibly wide carving pistes, unspoilt runs, mogul slopes and a World Cup descent – and once winter sports enthusiasts have skied themselves to a standstill, countless après-ski lodges await. With 270 kilometres of ski slopes, the Skicircus spanning Saalbach, Hinterglemm, Leogang and Fieberbrunn is one of the largest skiing areas in the whole of Austria. With many descents ending at the same point, it’s never far to the slopes and the hotels.

The slopes: Many ways to traverse the entire skiing area

Perfectly groomed ski runs provide ideal conditions for beginners, families and more serious skiers. In total, there are 140 kilometres of blue runs, 112 kilometres of red slopes and 18 kilometres of black descents. Winter sportspeople can explore them all via five circuits. Four of the circuits take between 2 and 2.5 hours, but the fifth circuit is different: skiers will need to allow seven full hours to complete this, but will be rewarded with stunning, panoramic views. With its blue pistes, the Saalbach circuit is perfect for newcomers to skiing. The famous slalom and giant slalom slope used in the 1991 Alpine Ski World Championship at Kohlmais is perennially popular with amateur sportspeople. Skiers and snowboarders can tackle the Hinterglemm circuit either clockwise or anti-clockwise; the former route has more red slopes, but both options promise long descents from high altitude. The Leogang circuit is less demanding, and has some great viewpoints for that perfectly panoramic snapshot. The Tyrol circuit is most suitable for serious sportspeople, who can test their carving and descent skills on the (mostly) red slopes. The Skicircus circuit – also known as The Challenge – is unique, and the ultimate test for any winter sports enthusiast: only those with serious staying power will complete the 72 kilometres of slopes at altitudes of 12,500 metres, a challenge that will take all day even without breaks. The Skicircus promises unforgettable adventures.

More experiences on skis and snowboards

Two floodlit slopes promise no end of fun for people of all ages. One piste starts near the Schantei lift in the centre of Leogang, while the other is located by the Unterschwarzachbahn in the Hinterglemm night park; this comprises a straightforward main descent and a red option. Skiers and snowboarders can test their downhill speed on various speed trial and racing sections throughout the region. Free ski races are organised for groups and companies on Thursdays, with mountain railway staff recording the times of those who register in advance. ‘Snow Trails’ alongside the main slopes, blending naturally into the contours of the landscape, are another major asset. Little jumps and sharp turns are incorporated into the natural waves and terrains, guaranteeing the most enjoyable descents. Beach flags at the start designate the Snow Trails, which are integrated into the interactive piste plan.

Guests can enjoy regional Salzburg specialities and true cabin classics in 60 mountain lodges. For those in the know, Saalbach-Hinterglemm is one of the most popular destinations for après-ski, an area in which it surely leads the field in Austria. During the day, those descending the slopes can stop at countless bars, large and small. When the sun goes down, hotspots like the Hinterhag Alm, Goaßstall and Alte Schmiede keep the party mood going. During the White Pearl Mountain Days event at the end of the season, scores of sunbeds are laid out to welcome the spring. For music fans, the two-day mountain festival in December is highly recommended. Many great bands and musicians bring a summery festival mood to the snowy winter landscape. That’s the diversity of Saalbach-Hinterglemm: take off the skis and snowboards, and party by the stage with some great artists.

Those who feel like a break from skiing can spend the day tobogganing instead. On the toboggan run at the Spielberghaus, even the ascent on a snow groomer can be a memorable experience. For the romantically inclined, ice skating and horse-drawn sleigh rides make a welcome change. Perfectly groomed cross-country tracks complete the wide-ranging package. The popularity of snowshoe trekking continues to rise – and in Saalbach there are countless opportunities for beginners and advanced trekkers to savour stunning views. It is also possible to engage in sport when the weather is poor. Visitors can swap the skis and snowboards for tennis rackets at the Hinterglemm tennis courts, Saalfelden has a climbing hall and Bobby's Pub in Saalbach has no fewer than 60 bowling alleys as well as bar games like billiards, darts and table football. Schnapps lovers can sample schnapps and liqueurs at the Enn distillery in Hinterglemm. Two thermal springs – the Alpentherme and the Felsentherme – promise relaxation an hour’s drive away in Gastein. Somewhat closer to home is the Tauern Spa in Kaprun, which has a sauna and pool complex nestling perfectly into its surroundings.

Plenty of natural snow falls across the Skicircus region most years – but if there is too little snow, 90% of the slopes are equipped with snow machines. Practically every year, therefore, the skiing season extends from the end of November or early December to the end of March. Some of the areas around Schattberg, Westgipfel, Zwölferkogel, Schönleiten and Asitz open until mid-April. In the average winter, there are 140 skiing days; the average snow depth on the mountains is 140 cm. Thanks to its great location, the Skicircus is a genuine ‘snow hole’. Given sufficient snow on the north facing side of the Alps, the valley transforms into a paradise of powdery snow – ideal for ski outings of any duration and degree of difficulty. The various tributary valleys are also good for ski tours.

Over the past few years, Saalbach has developed into a true freeride paradise. The Freeride Park in Leogang combines the alpine trend sports of freeride and freestyle. For early risers, some lifts open at 8:00am. These include the Zwölferkogelbahn, so visitors can admire the sunrise before making their first descent of the day. SkiMovie in Leogang films all would-be downhillers who register at the starters hut using their lift pass. When a skier passes through the start gate, cameras track them down the course from start to finish. At Snowmobile City, it is also possible to complete the racing course on a Ski-Doo. Daring souls can even steer a snow groomer themselves, under expert guidance. The Baumzipfelweg is a remarkable nature trail snaking through the tree tops of the forest. Highlights of the trail include the Golden Gate Bridge of the Alps, a 200-metre suspension bridge with superb views.