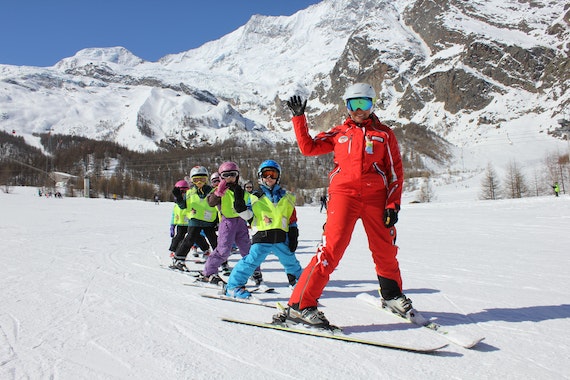 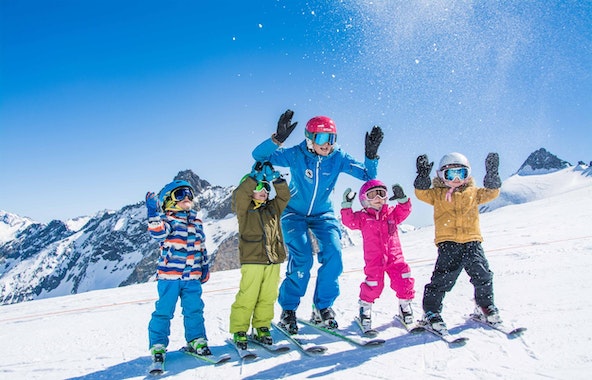 Glacier skiing where snow is guaranteed

Saas-Fee, Saas-Grund, Saas-Balen and Saas-Almagell are all situated in the Saas Valley at an elevation of 1,798 metres in the Swiss Alps. The skiing area comprises 150 kilometres of ski runs, half of which are classified red. It is even possible to ski down into the valley from 3,600 metres, the highest point of the skiing region; halfway down, you can branch off onto blue or alternative red slopes. There is also much for families with children to enjoy: one attraction for the little ones is the large children’s area with playground equipment and a fun park at the Kreuzboden, 2,400 metres above sea level.

The slopes of the Saas-Fee skiing area

The expansive skiing region, which reaches an altitude of 3,600 metres, is accessed from base stations in four villages of the Saas Valley. The longest descent is that from the Mittelallalin summit station to Saas-Fee. Beginners will head for 37 kilometres of blue runs, while 90 kilometres of red descents offer more challenging descents of the Swiss Alps. There are 23 kilometres of black slopes for expert skiers, while those who prefer freeride routes to prepared ski runs enjoy a full five kilometres of powdery snow: four fun parks – regularly maintained and adapted to the weather conditions – cater to the needs of freestylers. The Saas Valley is also renowned as an ideal destination for families. The kids’ fun park at Saas-Fee, Hohsi-Land kids’ paradise at Kreuzboden and Kian’s Adventureland at the Furggstalden Children’s Park promise action for young skiers and snowboarders, and those just starting out.

The ascent to the Mittelallalin summit station is an experience in itself: from the Felskinn plateau at 3,000 metres, an underground funicular railway transports visitors to the summit station at Mittelallalin, approximately 3,500 metres above sea level, in around three minutes. Once at the summit, visitors can decide whether to visit the spectacular Allalin revolving restaurant, an ice cave or ski straight back down the mountain. Whatever they choose, they will be rewarded with stunning views of the Swiss Alps. The descent from the Mittelallalin summit station is via red slopes 18 and 19. For a more leisurely return to the valley, a blue section heads some way down the mountain before switching to a red descent. Advanced skiers can tackle black run 11b from Spielboden to Längsfluh; another demanding descent for experts is black run 2 at Plattjen, which covers an altitude differential of 760 metres. Kian’s Adventureland above Saas-Almagell and the Hohsi-Land at Kreuzboden above Saas-Grund are sure to delight the youngest visitors. Aside from skiing and snowboarding, there are numerous activities to choose from, including snowtubing and Ski-Doo riding; otherwise, kids can relax and keep warm in a children’s cinema.

Après-ski restaurants in Saas-Fee include The Larix, one of several party venues on Gletscherstrasse. On the culinary front, Switzerland is generally associated with chocolate and cheese. One of the most enduring winter dishes is fondue, with cheese fondue enjoying classic status. While the majority of cheese mixtures are kept secret, the main ingredients traditionally include the varieties of Gruyère, Appenzeller, Vacherin and Emmental along with white wine. That said, most restaurants in the Saas Valley use their own cheese mixtures.

Many variants apart from the cheese fondue are available, including meat fondue with stock. The dü Saas-Fee, a hut-style eatery in the heart of Saas Fee, is a great place to enjoy a delicious fondue and raclette in a rustic setting. To enjoy specialities like cheese and meat fondue and raclette, reservations are recommended. Also recommended is the Steakhouse Saas, which serves steaks from Herens cattle of the Valais region. The Swiss Chalet restaurant presents superior French and Swiss cuisine in relaxed surroundings.

Alternatives whatever the weather

The weather is not always right for skiing or snowboarding. When the weather deteriorates, a visit to the Aqua Allalin is a good idea: along with the 25-metre swimming pool, there is a paddling pool for children and an adventure slide. For adults, there is a whirlpool and a wellness zone with several saunas; with a Finnish steam sauna, soft sauna and steam bath, relaxation is guaranteed. The package is completed with feature showers that replicate freezing fog, summer rain, waterfalls and mountain streams.

For an alternative out of the wet, try the Saaser Museum, which tells visitors all they need to know about the population and the history of Saas-Fee. The museum occupies a former rectory in Saas-Fee; constructed in 1732, the building opened as the Saaser Museum in 1983 following extensive restoration. Today the four-floor museum offers visitors a journey through the history of the Saas Valley. Along with scores of everyday objects and attire as well as minerals, visitors can see the original study of the writer Carl Zuckermayer, known for his play ‘The Captain of Köpenick’.

The climate in Saas-Fee is cold and temperate. The region has relatively high precipitation; the driest months, with 14 days of precipitation, are September and October. From November to February there are 16 days of precipitation on average, while March has as many as 18 days. Winter temperatures are generally between -13°C and 5°C. In summer, values range from 5°C to 17°C; rarely does the temperature top 19°C. Given the cold climate and high levels of precipitation, there is ample snow in winter. In fact snow is guaranteed in the skiing region spanning an altitude of 1,800 to 3,600 metres, with snow depths often exceeding four metres on the mountain. In 2017 the maximum snow depth in the valley was measured at 170 centimetres, although the average was around 40-50 centimetres. The winter season extends from November to April on average, and even in summer some slopes on the glacier stay open.

At 3,500 metres, sensational views are guaranteed at the Allalin revolving restaurant, which completes one full turn in less than an hour. The large floor-to-ceiling windows afford unique views of the spectacular peaks of Saas-Fee. Another attraction close to the Allalin revolving restaurant is the Ice Pavilion. As visitors pass down a 70-metre tunnel, they marvel at the bluish tint of glacial ice and the many illuminated ice sculptures. For children, there is an ice slide to enjoy too. On a clear day, it is possible to glimpse the Matterhorn from the viewing platform attached to the ice grotto. Leisure skiers looking for some added motivation can enter the Adrenalin Cup, an event taking place throughout the winter season. After registering their ski pass numbers, entrants compete in eleven disciplines, including giant slalom and winter hiking; their results are then evaluated and summarised in tables. Some events are videoed, while competitors pass through photo points in others. The emphasis is on fun, but there are also tempting prizes on offer for the monthly and season winners.