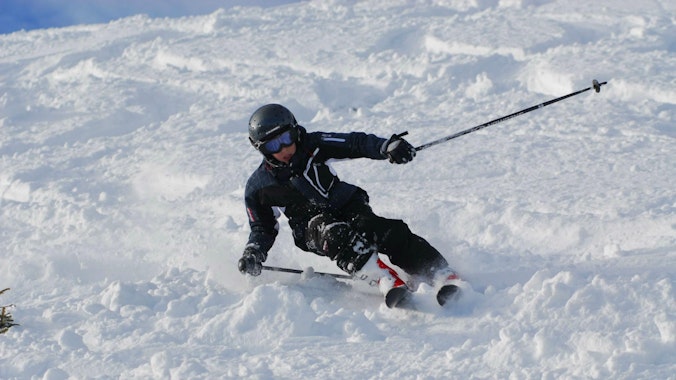 Serfaus-Fiss-Ladis ranks as one of the best skiing regions not just in Tyrol, but the whole of Austria: in 2017, it was actually voted the third best skiing area in the world. In winter, skiers and snowboarders can look forward to a picture-perfect, snowy landscape with a vast choice of slopes. The skiing area – created by merging the slopes of Serfaus, Fiss and Ladis – extends from an altitude of 1,200 metres to over 2,800 metres. Great skiing in the foothills of the Samnaun Group is guaranteed, and so is the snow. An area of 460 hectares encompasses almost 220 kilometres of ski slopes, 47 of which are designated blue slopes, with 123 kilometres of red runs and 28 kilometres of black pistes. In addition, there are 16 kilometres of marked ski routes criss-crossing the region. Nearly 70 lines and lifts in total keep things moving. One of these is the Serfauser Dorfbahn, an underground line serving the village and transporting the people of Serfaus from A to B. This is definitely an unexpected highlight. There are several gondolas, chair lifts, tow lifts, moving walkways and rope lifts around the region. The slopes of the skiing area open from early December to mid or late April.

Serfaus-Fiss-Ladis – the largest family skiing area in Austria – is the recipient of multiple awards. Its incredible views, broad slopes and challenging descents delight families, novices and professionals alike. Some of the highlights of Serfaus are as follows:

• At 2,770 metres, the Pezid promises superb views. It is accessed via the Komperdellbahn and Lazidbahn. When conditions allow and the avalanche risk is low, experienced skiers can make the descent from here.

• Those seeking the ultimate ski experience may tackle the Dirrettisima run from the Zwölferkopf, which descends almost 2,600 metres to Fiss (1,426 metres). A black run starts directly from the summit, with several red runs farther down finally leading into the valley.

• Two permanent racing courses promise action and adrenaline for established and would-be racers. One racing course is on the Schöngamp descent, the other is on the Peischlkopf descent. Approaching the base station of the Zwölferbahn, speed freaks can even see their speed indicated on a large display.

• Serfaus has a special area for carvers, who can access a separate carving piste on the Lawens descent to make wide turns and perfect their technique.

• For those who prefer hills and bumps to speed, the many mogul slopes of the skiing region are ideal.

• Want to relax and take it easy on the piste? Head for one of the 19 rest stations, where comfortable hammocks, ergonomic seats and cosy loungers invite visitors to recharge their batteries in beautiful surroundings. Tranquillity and stunning views of a vast mountain landscape are guaranteed.

• Many skiers dream of being the one to make the first tracks in fresh snow. In Serfaus, early risers can do just that on a guided tour. The tour includes a generous mountain breakfast to ensure participants are fit for their day’s skiing. There are eight different fun parks in the region. Snowpark Fiss has dozens of obstacles and jumps for those who love to perform eye-catching airborne tricks. Elsewhere there are fun areas and a special fun slope for children.

Other attractions on and around around the slopes

Serfaus has pistes laden with deep snow, mogul slopes, beautifully groomed slopes and many other attractions. In total there are 30 kilometres of cross-country tracks (including nearly nine kilometres of high altitude tracks) in the region, plus 10 kilometres of toboggan runs. One particular highlight is the Schneisenfeger Family Coaster, a summer and winter toboggan run that brings the whole family to Högsee lake in enjoyable style. The Serfauser Sauser zipline, meanwhile, shoots daring types over the heads of skiers on a cable from one point to another at speeds of around 65 kilometres per hour. For a sheer adrenaline kick almost 50 metres from the ground, the dragon-like Fisser Flieger flies four passengers across the Möseralm at speeds of 80 kilometres per hour.

Eating in the ski region

• Schalber Alm: The Kaiserschmarrn pancake dish on the Schalber Alm is a must for any visitor to Serfaus.

• To fortify yourself with hot and hearty soups, try the Suppenkaspar at the midway station of the Komperdellbahn.

• The Seealm Hög specialises in vegetarian and vegan dishes as well as fish.

• For après-ski, head straight from the piste to the Hexenalm in Fiss, the Weberkessel in Ladis or the Patschi Pub. The BamBam in Serfaus also deserves a mention. There are more excellent restaurants in the valley at Serfaus, Fiss and Ladis.

When the weather takes a turn for the worse and snow starts to fall heavily, the Museum Fiss is worth a visit. Occupying a heritage-protected farmhouse, the museum charts local history and culture. As for shopping, the Polychromelab is recommended for modern, top quality outdoor gear that can be put to immediate use on the mountain. Another shopping tip is Peep Shop in Serfaus, which sells equipment and fashionable clothing by its own Peep label and other brands. Connoisseurs are advised to try S’Ladele, where they can taste liqueurs, honeys and syrups in a pleasant atmosphere. Local facilities include some great wellness options (like yoga lessons) for passing the time when the weather deteriorates.