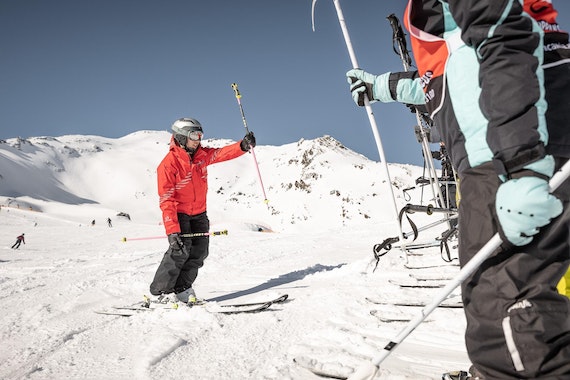 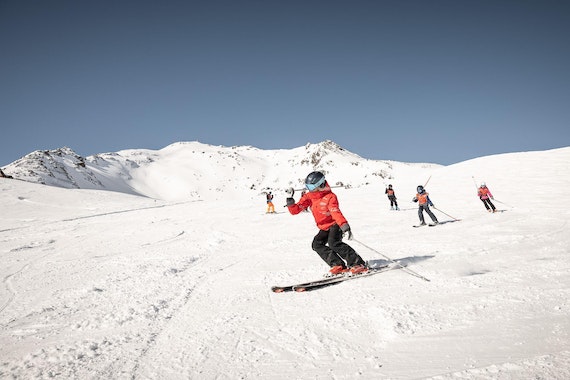 At the heart of the Ötztal Alps lies the Sölden ski area. The village itself is located 1,377 metres above sea level, and the highest descent begins at an altitude of 3,340 metres. With over 140 kilometres of pistes and two glacier ski mountains, the ski area has excellent snow conditions from October to May.

Huge choice of pistes at the Sölden glacier ski area

The Sölden glacier ski area is characterised by its three 3,000-metre peaks. Once you have ridden up to 3,340 metres, take the time to enjoy the mountain panorama from one of the viewing terraces or take a photo at one of the selfie spots before skiing or boarding down the mountain. About half of the 140 kilometres of slopes are blue runs. The rest are divided into red runs (44 kilometres) and black runs (29 kilometres). The ski area is well-known for its long, wide slopes. The four longest runs are between 8 and 15 kilometres in length. If you don’t want to be limited to the Sölden ski area, the Ötztal Superskipass also covers five other areas. This means you have access to 356 kilometres of pistes.

Beautifully groomed pistes for all abilities

Access to the skiing is mainly via the Giggijoch and Gaislachkogl lifts. Once you reach the top, you have a vast choice of runs covering 343 hectares. Sölden is the only ski resort in Austria to have three 3,000-metre peaks, all connected by a lift system. These are the Gaislachkogl at 3,058 metres, the Tiefenbachkogl at 3,250 metres and the Schwarze Schneide at 3,340 metres. The BIG3 Rally route is a round tour of the whole ski area that takes you up and down all three of the 3,000-metre peaks. A particular highlight is the area’s longest run, the 15-kilometre descent from the Schwarze Schneide at 3,340 metres down to the bottom of the Gaislachkogl lift at 1,370 metres – a difference of 1,970 metres. The Gaislachkogl is well set up for freeriders. If you would like to try out freeriding, you can book a guide at the Freeride Center Sölden. There is a fun park at the Giggijoch. The Hainbachkar and Silberbrünnl chairlifts whisk you up to the park, which also has a chill-out zone with loungers so that you can put your feet up before or after your ride. If you’re up for a challenge, you can choose from five difficult runs – numbers 7, 3, 14, 25 and the World Cup slope, piste 31.

More than 30 huts, restaurants and umbrella bars are dotted around the glacier ski area at Sölden. The Giggijoch Restaurant is located near the top station of the Giggijoch lift. This mountain restaurant furnished in Alpine style offers a wide range of local and international dishes. Apple strudel with custard is always a treat, whether as a dessert or with afternoon coffee. Along with an extensive choice of red and white wines, wine lovers can also sample fine wines from different vineyards. Après-ski hot spots include the Giggi Tenne, the Schirmbar Sonne and the Almrausch, where you can party till 8 in the evening. Then it’s back to the hotel for a hot shower and dinner before hitting the nightlife of Sölden. The ice Q is a gourmet restaurant where you can dine at an altitude of 3,048 metres. During the winter season a 5-course menu is served every Wednesday, but make sure you book a table in advance. If you prefer something a little more rustic, you’ll love the s' Pfandl. This restaurant offers Austrian cuisine and a few international dishes. Make sure you try the s' Grüner Hauspfandl or Sölder Pfandl, hearty dishes of grilled meat and noodles served up in a cast-iron pan. Veal shanks and fondue is also on offer if you order them in advance. Dip your toe into Sölden’s legendary nightlife at the Fire & Ice or the Mogul Bar and Music, where you can party and dance into the small hours. Sölden is also famous for hosting exclusive events. The Ski World Cup kicks off in October, marking the beginning of the winter season in Sölden. During World Cup weekend, there is a packed programme of events and the whole town is in party mood. Other highlights of the season include the New Year’s Eve firework display and the Electric Mountain Festival, where the turntables are manned by top DJs. Hannibal is a spectacular live show staged on the glacier, depicting the crossing of the Alps by the Carthaginian general.

Bad weather doesn’t have to be boring

If the weather keeps you off the slopes, there are plenty of other things to do in Sölden. Sölden itself is home to the Freizeit Arena, a leisure complex with pool, sauna, indoor tennis court and bowling alley. The Aqua Dome Tirol Therme Längenfeld is a thermal bath complex 15 kilometres from Sölden. Along with its thermal pools with water temperatures of up to 36°C, there is also a children’s area with water slides, a spa area and a choice of saunas. Längenfeld is also home to the Heimatmuseum, where you can learn all kinds of fascinating facts about how local people lived in the past. The Turmmuseum contains interesting photo displays of the Ötztal Alps.

The weather in Sölden

Situated at 1,350 metres above sea level, Sölden is located in southern Austria, close to the Italian border. The ski area extends to an altitude of 3,340 metres so it enjoys excellent snow conditions from October to May. Temperatures during this period usually range between -10°C and 20°C. The months with the highest number of sunshine hours are October, April and May. The months with the highest average rainfall are December, March and April. In 2013 a maximum snow depth of 411 centimetres was measured on the mountain, with an average snow depth for the season of 218 centimetres. In the valley the maximum depth was 25 centimetres.

007 Elements is a special cinematic installation on the summit of the Gaislachkogl. The exhibition shows scenes from the James Bond film Spectre and gives an insight into the sequences shot in Sölden. It also features scenes from other James Bond films. Another highlight of the Gaislachkogl is a beautiful lake, the Gaislachsee. This heart-shaped lake provides unique views of the Ötztal Alps. For the best view of the lake, head for the viewing platform on the roof of the ice Q restaurant. Thrills without skis are on offer at the Panorama Footbridge at the top station of the Tiefenbach cable car. The glass-covered footbridge, suspended by steel ropes, protrudes 20 metres above the glacier’s abyss. Another amazing viewpoint is located on the summit of the Schwarze Schneide. A platform with a pyramid has been installed 90 metres above the top station of the gondola. Whether you go there to meditate or just to enjoy the view, an unforgettable experience is guaranteed.

When is Sölden open?
Sölden is Currently closed. The season is from 22.09. to 06.05..
At which elevation is Sölden?
Sölden is located at an elevation of between 1350 (valley) and 3340 metres (mountain).
What is offered in Sölden?
Sölden is suitable for “Beginners, Advanced, Freeride, Freestyle, Family, Après-ski, Snow reliability“.
Are there ski schools in Sölden?
Yes, there are 23 ski schools in Sölden.
Is there a ski hire service in Sölden?
Yes, there is a ski hire service in Sölden.
faq.overview.six.question
faq.overview.six.answerNo
Share ski resort details




Top